Warning: "continue" targeting switch is equivalent to "break". Did you mean to use "continue 2"? in /homepages/8/d92712396/htdocs/lowernorthside/wordpress/wp-includes/pomo/plural-forms.php on line 210
 Paint | This Old Ithaca House

On June 28, the same day we had our energy audit, Perfect Painters started scraping away old paint to prep for exterior painting. In the two weeks since then they’ve also sanded, primed, replaced siding, replaced rotted trim, and completed most of the painting. In all that time I haven’t had much time to give any updates. Even worse, I’ve got big gaps in photo-documenting some of the work, like the progression of shake shingle siding being replaced (a wall of unfinished wood looked pretty nice).

I suppose something’s better than nothing. Since I’m so far behind, I’m going to do this with a photo gallery. This ain’t pretty, so just click on the first image to start.

I have a bunch of posts about the solar installation, energy audit and progress on the exterior paint job on the way, but they’re all on the back burner. I was in Massachusetts this past week for work, we hosted guests from out of town over the long weekend, and now we’ve been scrambling to choose colors before Perfect Painters gets started on actual painting (as you’ll see in a future post, they’ve been busy scraping, sanding, priming and replacing shingles).

We’re considering a number of options, with an obvious tilt towards green: 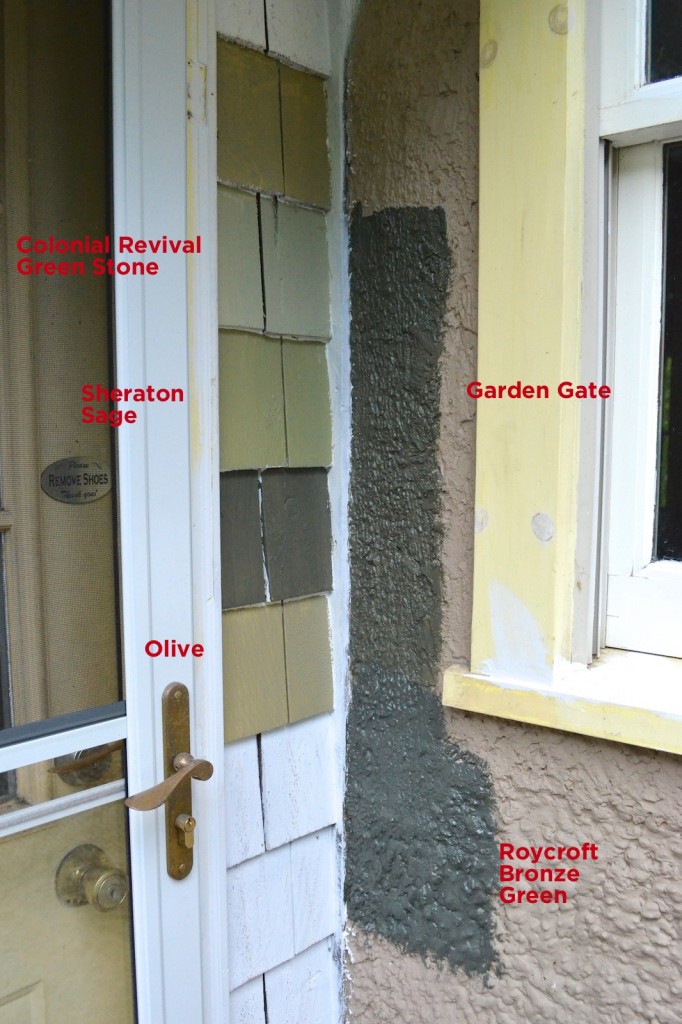 The front-runner is Sheraton Sage on the shingles, Garden Gate on the stucco, Roycroft Vellum for the trim, and Roycroft Copper Red for accents like window sash. The last two colors come from Sherwin-Williams’ Arts & Crafts collection. 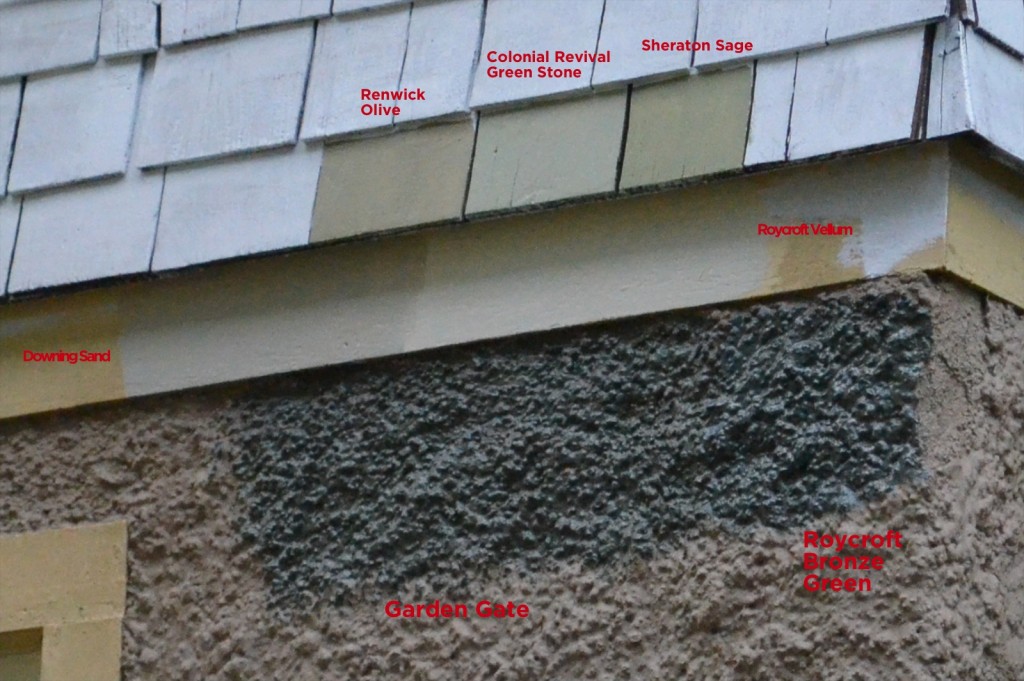 As a reminder, here’s how the house was painted when we took possession. We’re not fans of brown or yellow. 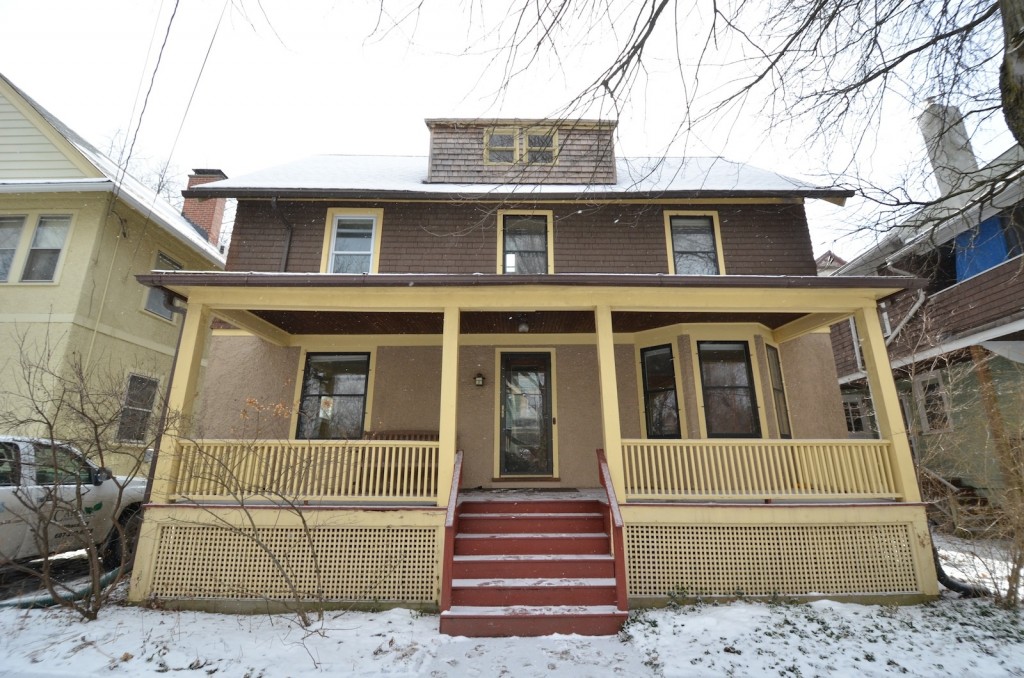 You can see we’re also considering Roycroft Bronze Green for the stucco. Using a lighter combination might be on the table too, such as Colonial Revival Green Stone on top and Sheraton Sage on the bottom.

That last option would be a lot less Craftsman-appropriate than our leading choice, which is already pushing it with that sage, but we’ve already decided that while we want to respect history as much as possible, we don’t want to be shackled to it either. We’re thinking that combining historic and modern colors and using even the classic colors in novel ways (Craftsman houses didn’t really feature very light trim like the Roycroft Vellum until the late 1910s or early 1920s, as far as I can tell) is the best way to honor the past and consider our tastes too. Besides, it’s not like anyone else in Ithaca is choosing from the historic palette.

Historic Ithaca‘s library (you get free access if you’re a member) was immensely helpful in getting us started. Robert Schweitzer’s Bungalow Colors (affiliate link) is an outstanding resource too. It’s the only book dedicated to choosing colors for Arts & Crafts house exteriors and contains history of the Arts & Crafts movement, color theory, color choices for certain house types, before & after examples, and paint swatches from Sherwin-Williams. It’s been incredibly useful and has helped support some of our decisions such as the red accents and two-tone body.

The pressure to get this right is intense. Unless we want to spend thousands of dollars doing this again, the decision could last decades.

Every day this week I’ve been going to the house after work and staying there past midnight. This weekend my wife was out of town so I had to work on the house myself, painting while I watched people walking outside and enjoying the amazing, rare weather (and events like Streets Alive and Ithaca Food Truck Roundup).

I encountered some mission creep on Saturday when I noticed the kitchen faucet was leaking. I’ve never fixed a faucet in my life, but the internets told me it was likely that an O-ring on the cartridge was failing. After dismantling the faucet, however, I couldn’t pull the damn cartridge out. Again the interwebs saved me and I learned that cartridge pullers were a thing and could help extract them when they won’t budge. 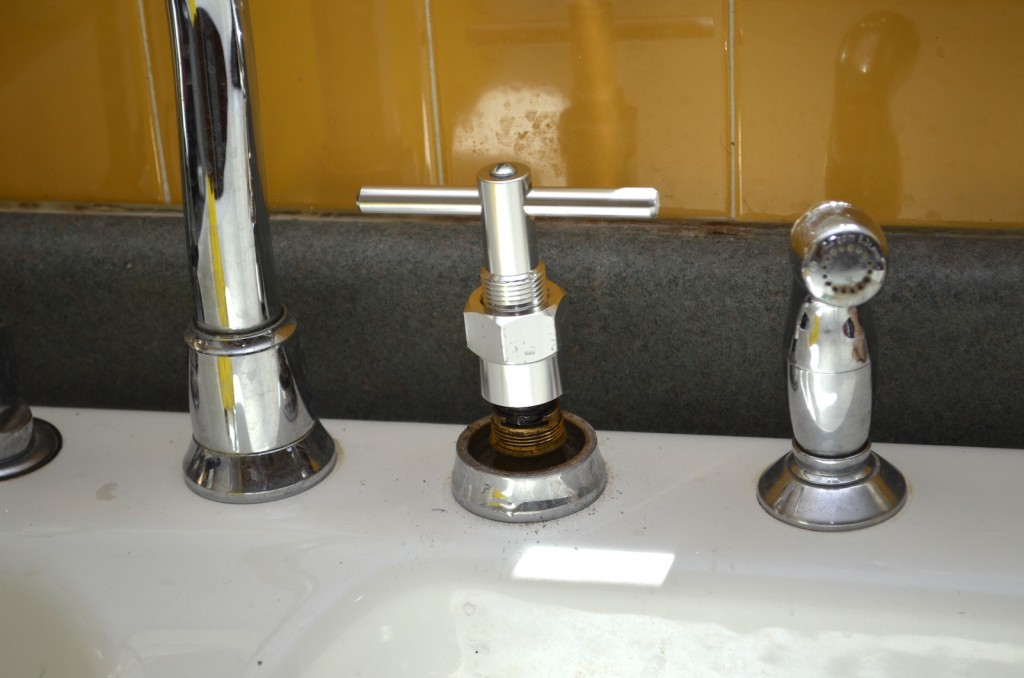 You screw the puller into the cartridge and rotate that big nut, pushing it against the faucet’s main pipe and magnifying the torque you’re applying to help extract the stuck cartridge. 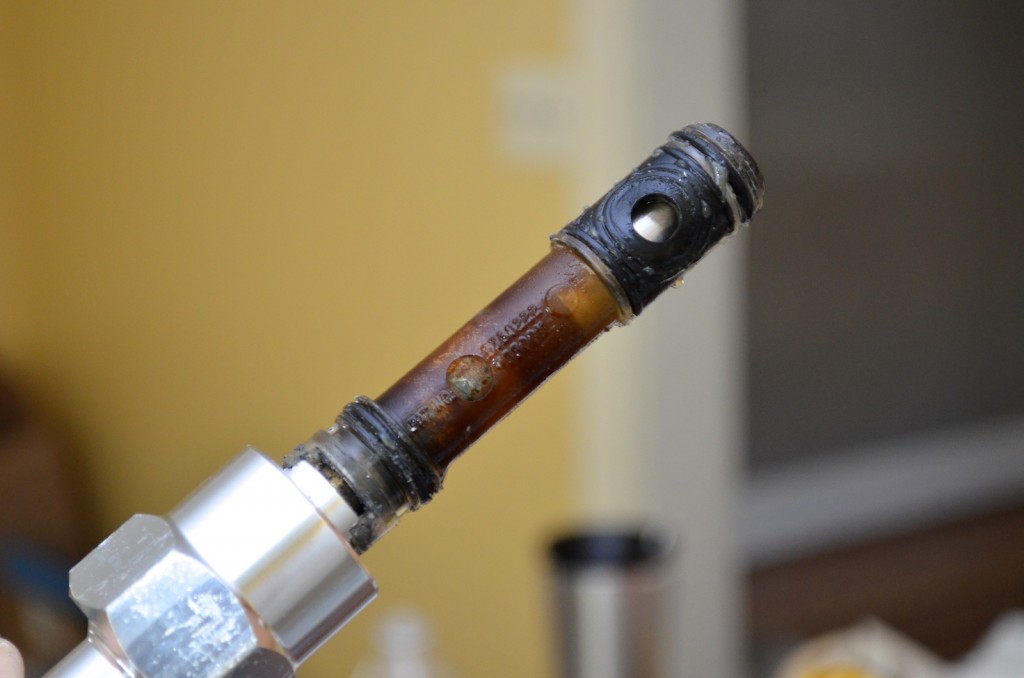 While I was out getting the puller I decided to just get a whole new cartridge rather than replace the O-rings. Installed the new one and the faucet works good as new.

Then the rest of the weekend was spent fixing the terrible walls in the living room: 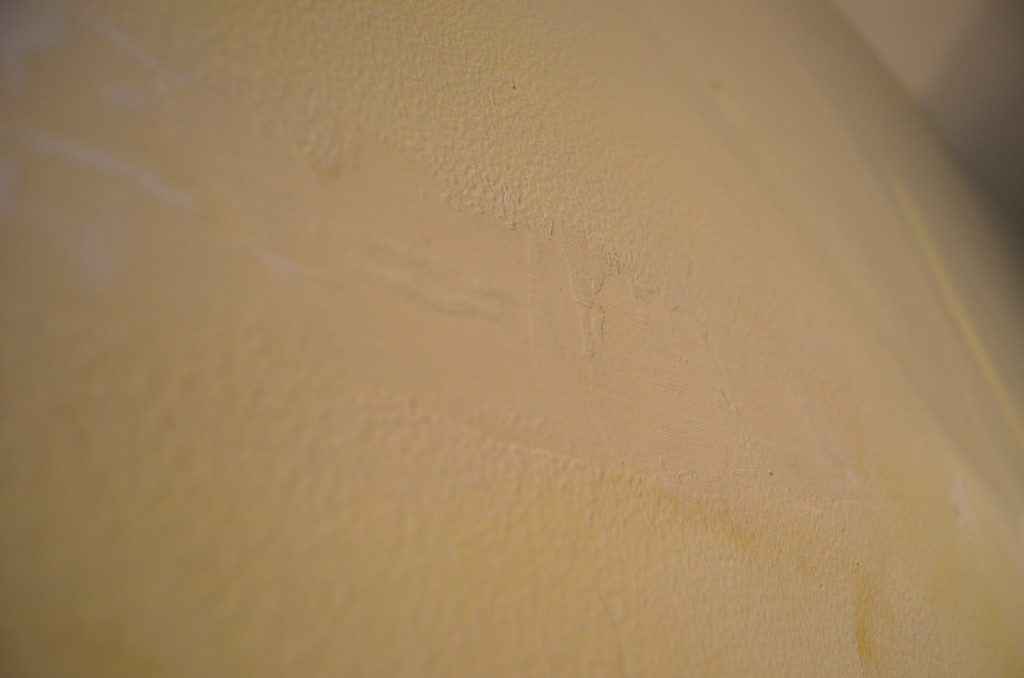 And repainting ceilings like this one in the foyer: 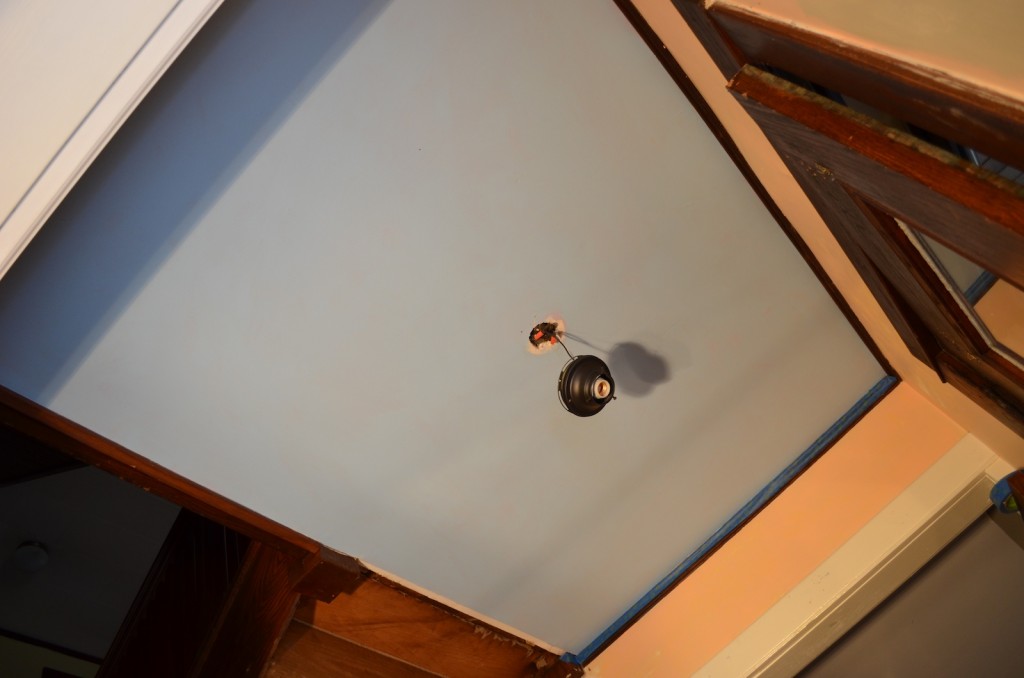 The ceilings involved more mission creep. I tried fixing a portion of the living room ceiling that previous owners had overpainted with red. The new ceiling paint didn’t quite match and I didn’t think I could stand to live with it, so I ended up repainting the whole damn ceiling. The dining room ceiling had marks on it too, so that also got repainted.

On Monday the floor guys told me they had filled the entire floor and were ready to start sanding the next day. 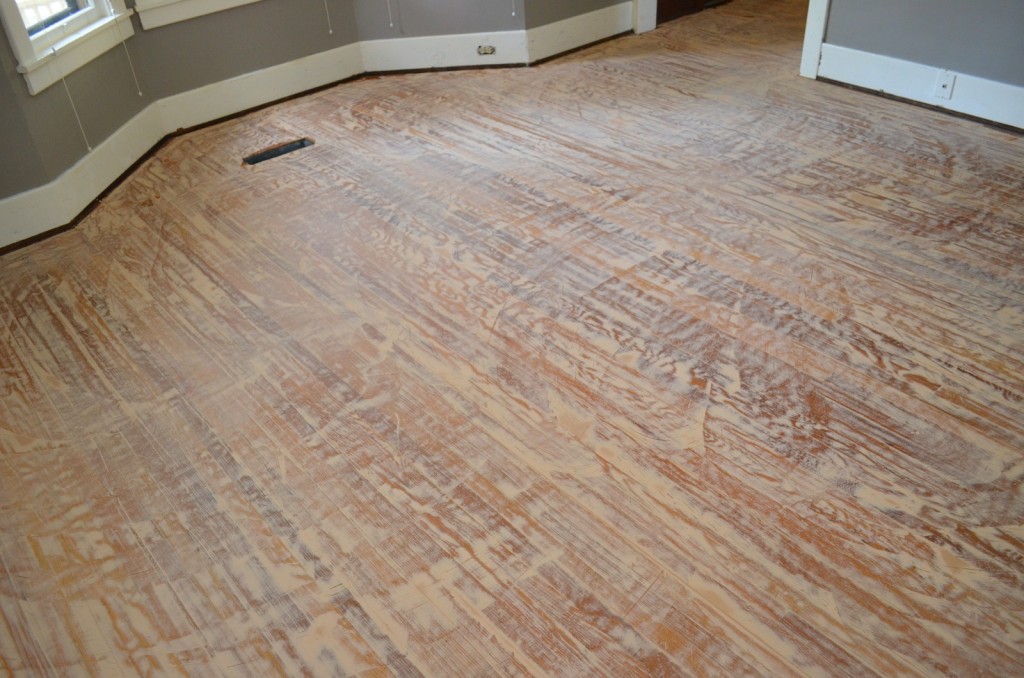 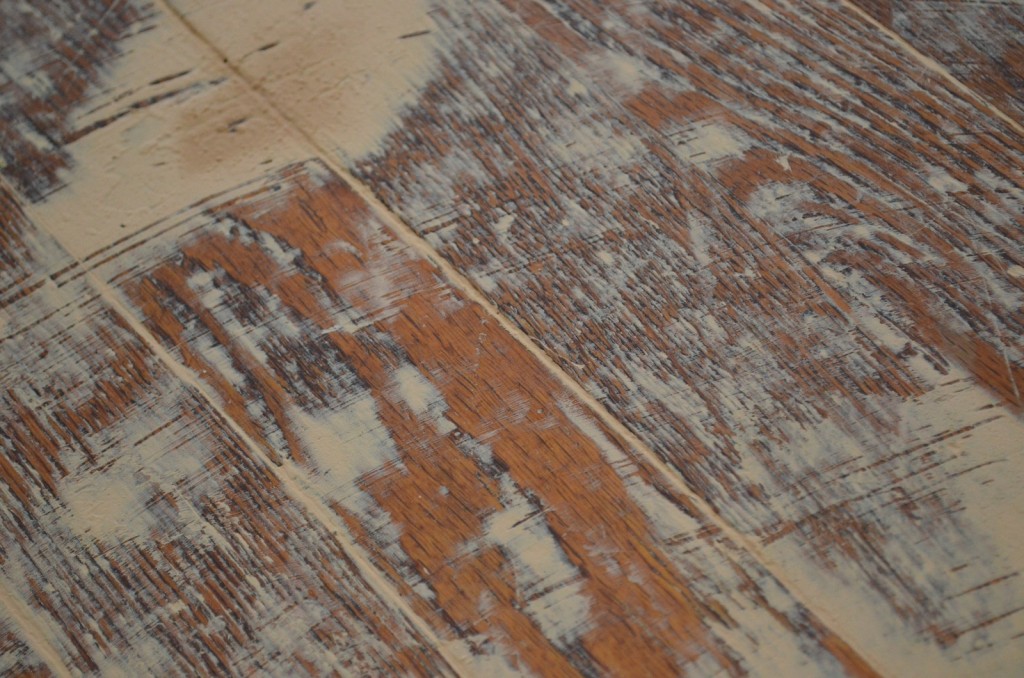 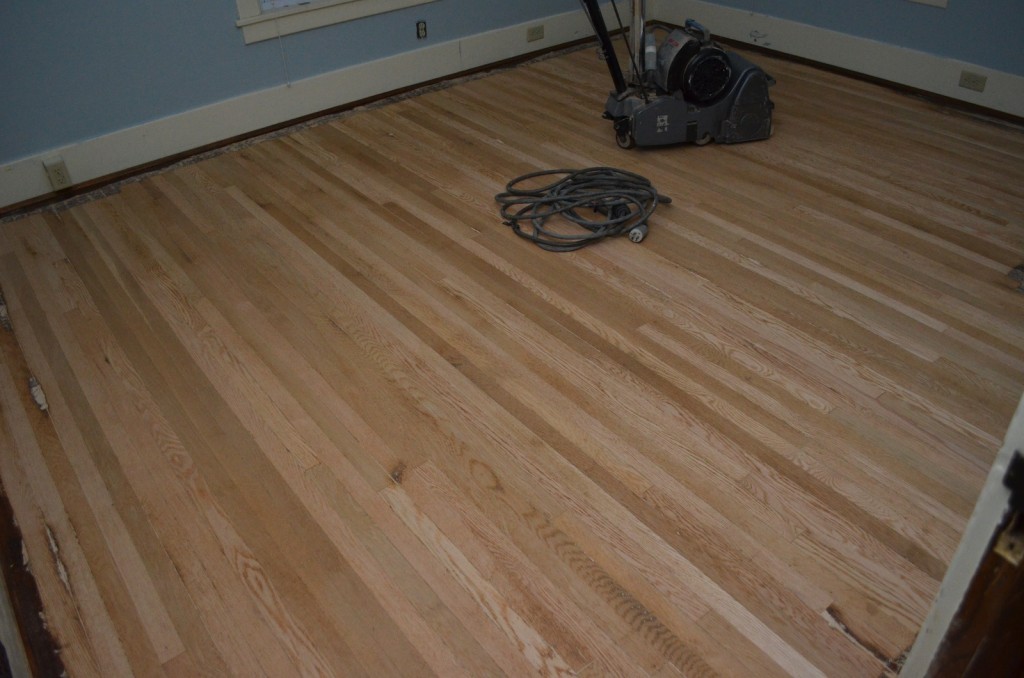 with some portions sanded to a higher grit (the darker area). 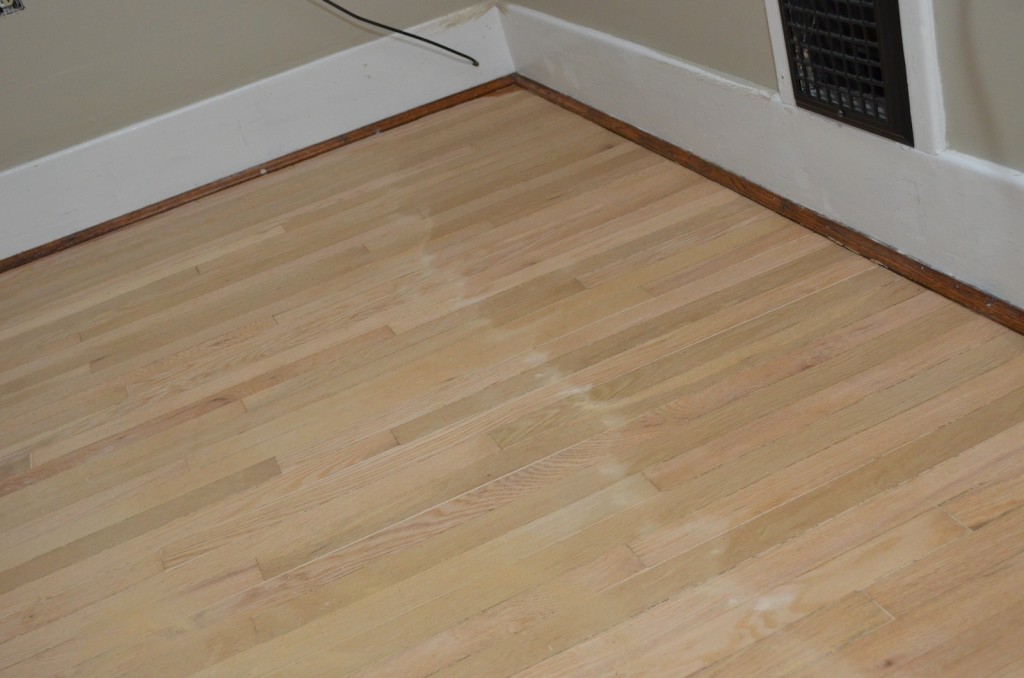 This is why I hired professionals. Whoever did it before not only left sanding marks all over, but they took off far more material than necessary. The big belt sanders used for refinishing floors are dangerous. These guys managed to remove just what was needed. 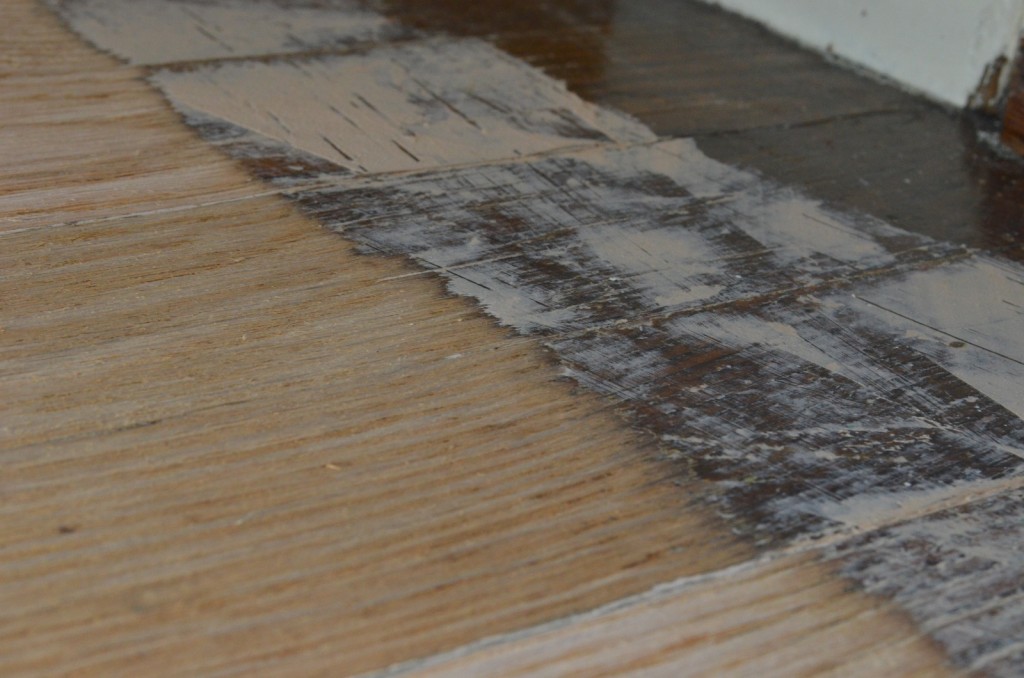 Tonight (and by tonight I mean May 8 even though I’m writing this at 2 am on May 9) the floor guys stayed until 7 pm to finish sanding the entire upstairs. We were forbidden from doing work up there. I suspect they’ll finish the downstairs tomorrow, which is why I can’t thank our friends Keith and Stephanie enough for coming over and helping us paint the downstairs trim.

The plan seems to be to start applying polyurethane on Friday. Since we’re out of town this weekend and feeling guilty about it, the timing is perfect: we can’t work while the polyurethane is curing anyway.

We’ve been spending a week spackling, sanding, and caulking. Most of this has been done after work, which has meant a lot of eating out and peanut butter and jelly sandwiches; not our usual healthful fare. It’s extra frustrating because it seems like there’s an infinite amount of wall and trim repairs to do. Every time I feel satisfied I find another imperfection. This weekend, though, we decided we just had to let it go and begin painting or it would never get done. 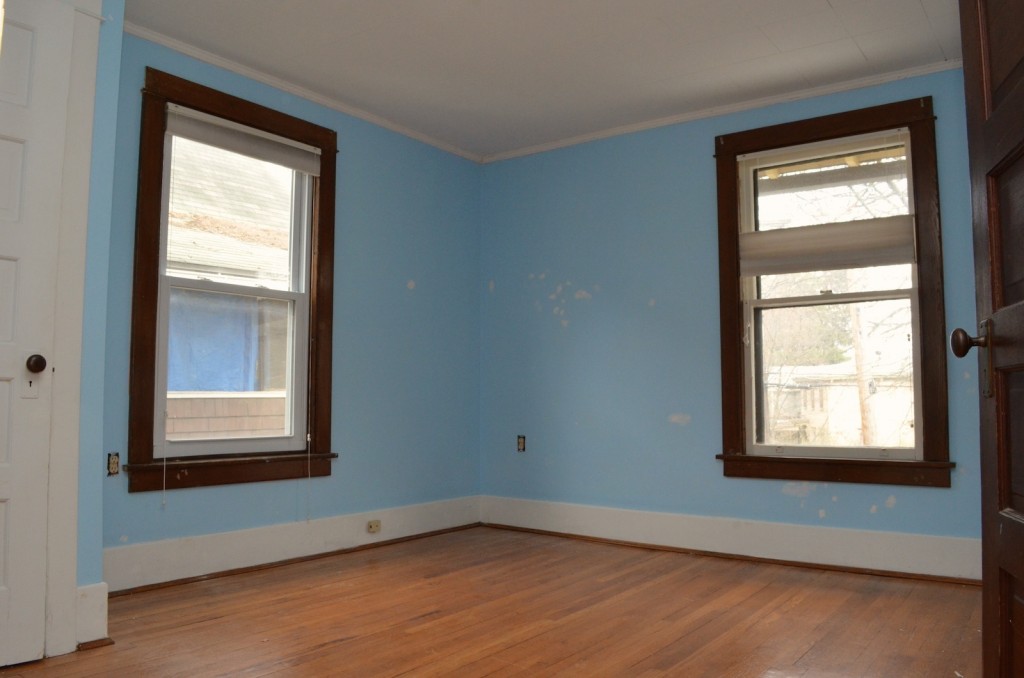 Our interior designer helped us pick colors earlier and in the process she learned that Sherwin-Williams was having a sale this weekend. I’ve spent a lot of time on painting forums lately and I’ve come to the conclusion that professional contractors love Benjamin Moore Aura and Sherwin-Williams Duration. You probably can’t go wrong with either, but the conveniently timed sale meant we were going SW. They have a new line called Emerald that’s supposed to be more durable, easier to level out and zero VOC. For a few bucks more a gallon I went for it.

Deciding on sheen ended up being a little tough. I was set on satin but some comments from the salesperson made me switch to matte to reduce the visibility of surface blemishes. It’s a step above flat, Sherwin-Williams’ lowest sheen, so it should still be moderately washable. The trim will be semigloss.

Once I had all the supplies in hand, our good friend Brent lent invaluable assistance over the weekend to get us started. I painted a room for the first time 7 years ago when I sold my condo and I haven’t done it since. It was great having someone take the lead cutting while I rolled the walls. Eventually he taught me how to cut in too and that also reduced painting time. 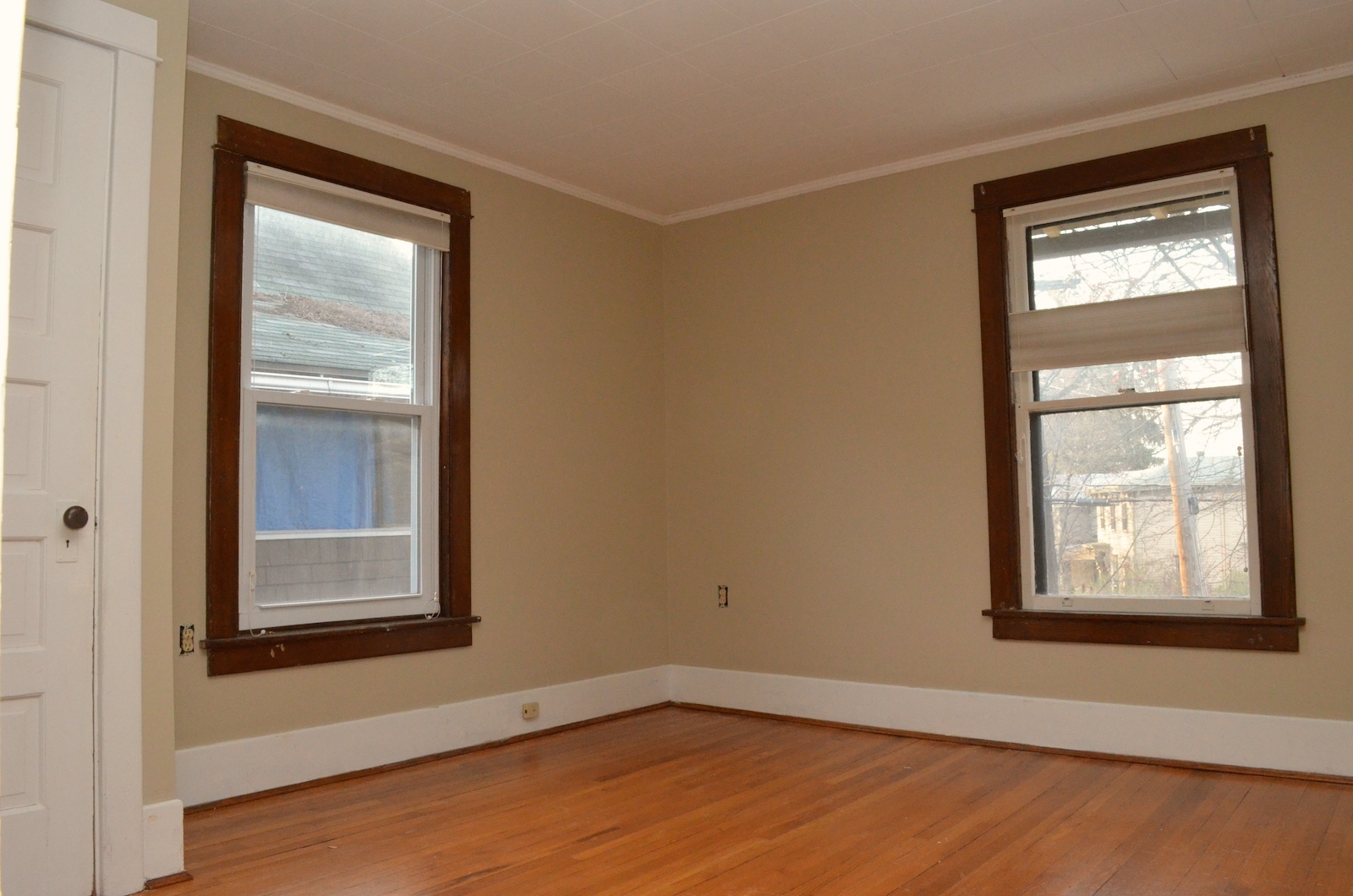 The baby blue in all 3 guest bedrooms is gone, replaced by the much classier Urban Putty. Everything still needs a second coat because that blue is still powering through in some spots and putting down two coats is a good idea anyway.

I find it hard to rate SW Emerald when I have nothing to compare it to, but I can say it didn’t seem to spatter at all when rolled, coverage is great (I used the low end of their coverage rating and I’m pretty sure I’ve overestimated how much paint we need), and the hiding over that intense blue was pretty damn good (though as I said, I’d still suggest two coats). If it holds up well in the years to come, I’ll probably never think about the paint again. If it performs poorly, I’ll be sure to update.