Warning: "continue" targeting switch is equivalent to "break". Did you mean to use "continue 2"? in /homepages/8/d92712396/htdocs/lowernorthside/wordpress/wp-includes/pomo/plural-forms.php on line 210
 January | 2015 | This Old Ithaca House 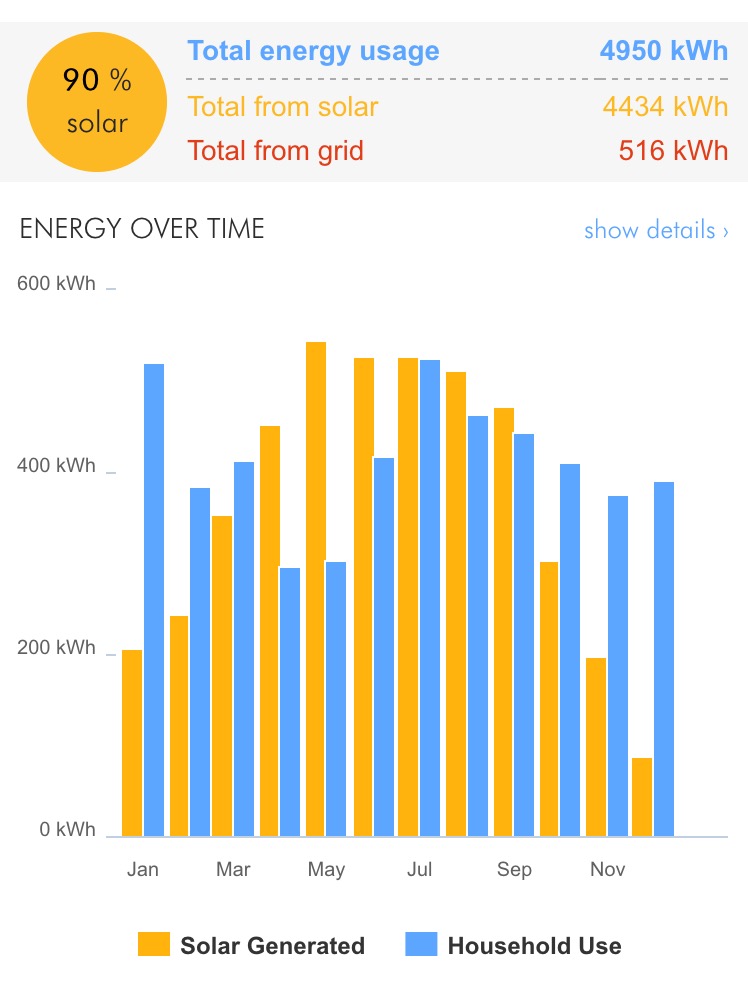 We just finished our first full calendar year (i.e., January to December) with our solar PV system and it was a great one. Renovus (our solar installer) gave an amazingly spot-on estimate: they (well, their software) figured our 12-panel, 3.92 kW system would produce 4494 kWh per year. As you can see we got 4434 kWh this year. Less than 2% off.

I had some perceptions that didn’t meet up with reality. For example, I felt this summer was unusually mild and much less rainy than 2013. It also seemed like we enjoyed a warmer and sunnier September too. The data doesn’t bear that out. August 2013 was the first full month the solar system was in operation, so comparing from that point onward you can see that 2013 outperformed 2014 in every month except December.

I’m pretty happy that 90% of our electricity needs are met by solar, but I obviously want to do better. We have 300 watts of kitchen recessed lighting that gets used a lot (at least 2 hours a day; likely more) and still hasn’t been switched over to LED. I have a bunch of vampire devices like the Playstation 3 and Wii that don’t get used much but waste energy nonetheless. There’s more we can do to keep moisture out of the basement which would allow the dehumidifier to run less often. I’d love to get to 95% in the next year.

I can’t neglect to mention that we may have increased our usage by having central air conditioning installed this past spring (also by Renovus; they recently added HVAC to their list of services). I still need to write about that. Before that we relied on several window units. I haven’t done any work to compare the electrical load of central air against 3 window units, but according to our NYSEG bill there’s no doubt we used more electricity:

So despite a warmer July in 2013, we used the same amount of electricity in 2014. And despite the same average temperature in August, we used 50% more electricity this year, though this comparison doesn’t quite work since in 2013 we were away for 10 days that month. Still, it’s probably safe to say we’re paying for that extra comfort.